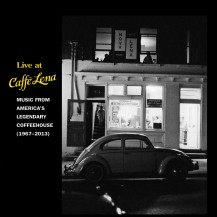 What we did: We helped to uncover 700 recordings of live performances. With funding from The GRAMMY Foundation and other grants and corporate sponsorships, we digitized the entire archive, then restored and remastered 47 tracks for a 3-CD box set with 40 page booklet, released on Tompkins Square Records to coincide with the release of producer Jocelyn Arem’s book Caffè Lena: Inside America’s Legendary Folk Music Coffeehouse (powerHouse Books). The complete archive was donated to the Library of Congress and is searchable online via a digital database.

Praise: “An account of the misfits, poets and prophets who passed through this fabled New York club during and long after the folk boom.”  – Rolling Stone